Yep, it’s time to see the upcoming Nendoroid surprises and plan your finance to fulfill your expanding wishlist. Here is the complete list of all Nendoroid – including Petite, Co-de, and More! (pun intended XD)

END_OF_DOCUMENT_TOKEN_TO_BE_REPLACED 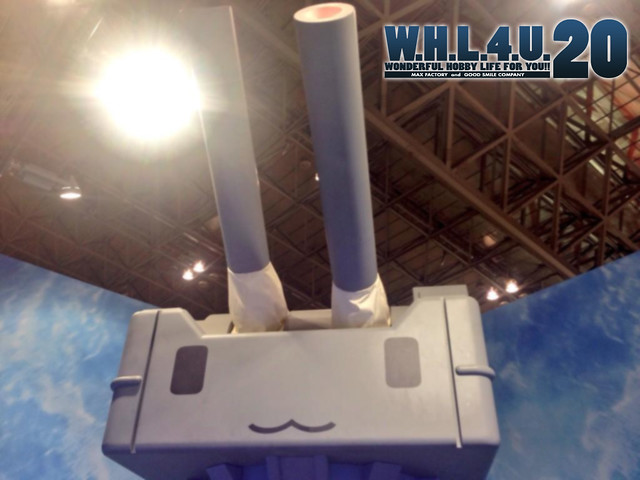 Hey, it is that time of the year again! The time when we are going to be surprised – while out wallet is screaming – as the wave of new and upcoming Nendoroids are on-display, either as a design or prototypes. As usual, we will keep you updated on the new Nendoroid line-up in the Summer Wonder Festival 2014, so stay tuned for updates! XD

END_OF_DOCUMENT_TOKEN_TO_BE_REPLACED

Ah … time really runs so fast, now that we have already reached the Winter Wonder Festival 2014. A wave of new Nendoroids will be on-display here, along with some leftovers from the last WonFes, so as usual, we will keep you updated on the new Nendoroid line-up displayed on the event.

END_OF_DOCUMENT_TOKEN_TO_BE_REPLACED

We have seen the products. We have seen the teasers. We even have some leftovers from the last WonFes. And today, the Wonder Festival 2013 Summer will be held and we can surely expect a lot of surprises there.

This post will be updated once we get new shots of the displayed Nendoroid in the event.

END_OF_DOCUMENT_TOKEN_TO_BE_REPLACED

The Summer WonFes 2013 will be held tomorrow, so as usual, Mikatan has posted teasers of what we can expect from the bi-annual event.

END_OF_DOCUMENT_TOKEN_TO_BE_REPLACED

*phew* I guess this post title is the longest one I have ever written in Nendonesia. XD

Anyway, GSC has announced their exclusive products for Summer WonFes 2013. The first one is the lovely Nendoroid Nyaruko: Maid version from Haiyore! Nyaruko-san W which is currently on air in Japan.

“Earth’s entertainment is the best in the universe!”

From the second season of the anime sure to bring your SAN points down, ‘Haiyore! Nyaruko-san W’ comes a figure of Nyaruko herself dressed in an adorable maid outfit! She has her hair tied up in little balls together with cute twin tails, altogether creating an adorable appearance!

Nyaruko comes with three different expressions including a winking expression, an excited expression as well as a smiling expression. She also comes with a variety of optional parts including a ‘Nightgaunt Drink’ on a tray, a ‘Kurogane no Striver’ Blu-ray boxset, heart effect parts to let Nyaruko show her never-ending love and even a Nendoroid sized version of the mysterious Manta-kun! The crawling chaos is ready to serve all the fans!

For us who cannot attend the event, no worries there, because she will also be available for pre-order at Good Smile Online Shop starting from July 28. The Nendoroid will cost 3500 Yen and scheduled for November release.

Another WonFes, another IDOLM@STER Petite set pops up! Yep, Nendoroid Petite: IDOLM@STER Cinderella Girls – Ranko, Uzuki and Mika + Live Stage Set will be one of GSC’s exclusive products for the upcoming Summer WonFes.

From the popular social game ‘IDOLM@STER Cinderella Girls’ comes a set of Nendoroid petites including Ranko Kanzaki, Uzuki Shimamura and Mika Jougasaki each in their S-Rare+ outfits! They are all dressed up and ready to perform in their stage outfits – a LIVE Battle at this Summer’s Wonder Festival!

Similar to the maid Nyaruko, this Petite set will also be available at Good Smile Online Shop from July 28. The Petite set is priced 4500 Yen and scheduled for November release.

Well, what do you think, Nendonesian?

Winter Wonder Festival 2013 is held today, February 10th at Makuhari Messe. As usual, we are going to list the upcoming Nendoroid being displayed in the event.

There are a total of 40+ Nendoroids in either completely painted, uncolored prototype, as well as the design, being displayed there. Here they are:

END_OF_DOCUMENT_TOKEN_TO_BE_REPLACED

It is less than 48 hours, so as usual, Mikatan teases us with some misaligned photos of the upcoming Nendoroids that should be displayed during the event.

Well then, without further ado, here are the pics:

END_OF_DOCUMENT_TOKEN_TO_BE_REPLACED

Nendoroid More stands have been released just a few weeks ago, and now GSC are adding a new color option to the mix: ORANGE.

The arm attached to the clip is articulated, allowing you to move it in any direction so that you can place the Nendoroids exactly where you want them! Each stand comes with joints for both Nendoroids and Nendoroid Petites, so you can display any of your favorite characters from either series!

This product was developed by this year’s new employees at Good Smile Company. They have also been running a blog testing the development up until this point, which can be found here: http://ameblo.jp/blog-shinsotsu2012/

Both of these Nendoroid More stands will be priced at 500 Yen each and there will be only 500 pcs available at GSC’s Winter WonFes 2013 booth.

The arm attached to the suction cup is articulated, allowing you to move it in any direction so that you can place the Nendoroids exactly where you want them! Each stand comes with joints for both Nendoroids and Nendoroid Petites, so you can display any of your favorite characters from either series!

This product was developed by this year’s new employees at Good Smile Company. They have also been running a blog testing the development up until this point, which can be found here: http://ameblo.jp/blog-shinsotsu2012/

A little note regarding the Nendoroid More is also written in the page. It basically reminds us that the Nendoroid More series is only designed to work with Nendoroids (or Nendoroid Petites) that have a tabbed stand that connects to a hole in the back of the figure, thus it will not support Nendoroids that make use of other stand types.

Yep, Nendoroid Snow Miku: Strawberry White Kimono version finally gets a proper official announcement by GSC – although the official pics are not new for us.

Snow Miku is visiting again this Winter, this time in a white kimono!
Designs for the 2013 Snow Miku were submitted by fans to the piapro website and then a winner was chosen by viewers during a NicoNico Live Broadcast. The winning entry was an illustration of Snow Miku with a slightly more mature air, wearing a beautiful white kimono – which has now been transformed into a Nendoroid!

Her cotton veil can be removed, and she comes with two different hair styles to choose from when it is removed – you can display her with either her trademark twintails, or instead with her hair tied up. Sitting parts are also included for a more relaxed pose, and she also comes a number of items for a snowy day, including an umbrella, a toothpick and a snow bunny.

The snow lady is priced at 4000 Yen and scheduled for February (available at WHL4U 17 booth at WonFes and several other venues) and June for pre-order from Good Smile Online Shop.

Details regarding the availability can be read in the official product page.

Well, are you going to get this cute and lovely lady, Nendonesian? ^^