We will participate in Binus University Event, called as Bijac no Tanjoiwai 7.

Unfortunately, due to the delay (probably because of political issue) the Nendonesia T Shirt will not available tomorrow because the printing company is sending the shipping estimation is at 5 April 2014. 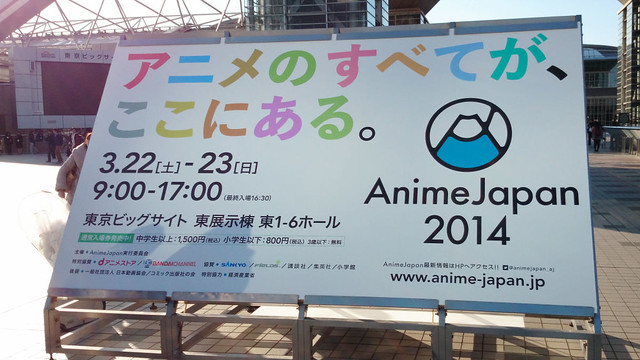 END_OF_DOCUMENT_TOKEN_TO_BE_REPLACED

So you missed the first shipment of Nendoroid Hatsune Miku 2.0? Well, here is another chance for you to grab her as the pre-order for the second shipment has already been announced and available since the last week. Yay! XD

The second shipment of the electronic diva!
The second shipment of Nendoroid Hatsune Miku 2.0 is ready for orders!
Miku 2.0 comes with both the winking expression and the excited expression that featured in the opening movie of the ‘Hatsune Miku and Future Stars Project mirai’ game. She also comes with all new optional parts such as a keyboard and a guitar for some brand new poses, and even comes with some alternate parts that allow you to pose her sitting down! It’s the same Miku everyone has come to love with an extra touch! She also still comes with her famous leeks! ♪

Meanwhile, Nendoroid MEIKO, which was released back then on December 2011, is also getting another run!

The virtual singer in a class of her own!
The first in a series of Nendoroids based on the original Japanese Vocaloid characters is the wonderful virtual idol, MEIKO!
She comes with extra parts such as a mike, mike stand and extra lower body part that allows you to recreate the dynamic scene from the original packaging of the software. She also comes with a variety of extra parts that allow you to give her a drunk look – as all fans will know, MEIKO loves her alcohol!
You can pose her in a serious pose, a fun pose or any other pose you think suits her best!

The re-sale version of both Nendoroid Hatsune Miku 2.0 and MEIKO will be released on June 2014. Oh, and it seems that you can also get the bonus Nendoroid Pouch: Miku version if you pre-order at the Good Smile Online Shop.

When I saw Nendoroid Alisa‘s design for the first time, I was really surprised considering the fact that Namco Bandai as the licensor of GOD EATER series handed out the license to GSC to produce the Nendoroid. XD

“I’m slowly starting to understand how I can help.”
From the popular action game ‘GOD EATER 2’ comes a Nendoroid of the popular heroine who debuted in the original game, Alisa! She is of course equipped with her ‘God Arc’ weapon, which comes in both its standard ‘Blade Form’, as well as its ‘Gun Form’ and ‘Predator Form’! All the forms keep their imposing appearances even in the cute Nendoroid size!
But that’s not all – she also comes with various other parts including the Aragami ‘Ogretail’, as well as three different expressions – her standard face, a shouting face for combat scenes and an embarrassed face! A huge collection of parts to help fans recreate their favorite scenes from the game, and experience the unique GOD EATER atmosphere in the cutest form ever!

Considering the plethora of weapons that Nendoroid Alisa brings, I think you can probably tell that her price will be a bit steep. Yep, she is priced at 5500 Yen and scheduled for July release.

Are you getting her, Nendonesian?

I just realized that it has been about three weeks since the last time I posted a news article! So sorry about that, Nendonesian, I have been extremely busy with my works and other activities for the recent weeks. XD

Anyway, in case you have not known yet, Nendoroid May’n has been announced officially by GSC and she has already gotten her own page in the GSC website!

Commemorating ten years of May’n!
In commemoration of the upcoming ‘May’n Road to 10th Anniversary Japan & World Tour 2014-2015 “dots and lines”‘ comes a Nendoroid of May’n herself! Her well-known hairstyle and trademark short pants have all been converted into Nendoroid size as accurately as possible for fans to enjoy!
Her microphone is included together with special hand parts based off actual poses from her live performances, allowing you to pose her ready to perform on stage! A hand towel from her live performances is also included for her to hold! On the other hand, she also comes with a delicious taiyaki allowing you to pose her as the (self-proclaimed) Goodwill Ambassador for Taiyaki! Simply choose between the serious or the more playful May’n whenever you like!

Nendoroid May’n will be exclusively available for purchase (4400 Yen) at the “dots and lines” tour to celebrate her upcoming 10th anniversary. Note that she has already been available at the first concert in Kanagawa CLUB CITTA on February 23.

No info regarding the possibility of the pre-order version of Nendoroid May’n yet.