I have to admit that it is kinda rare to see a custom Nendoroid from Girls und Panzer, but it seems that there are someone who does precisely that. Yep, instead of the official Nendoroid Nishizumi Miho who wears her school uniform, this one will have her wear her jacket.

END_OF_DOCUMENT_TOKEN_TO_BE_REPLACED

We have just been contacted by J-Figure.com, an online figure shop based on Tokyo that are selling both new and pre-owned figures from Japan. They are currently running an interesting campaign:

All Nendoroids Free Shipping from Japan!

The promotion is valid for any pre-orders and pre-owned Nendoroids within October that are shipped by Japan Post’s SAL unregistered small packet delivery service.

Originally, the promotion is only applicable for shipment from Japan to USA/Europe, but we have confirmation by J-Figure.com that the promotion is now valid for worldwide shipping where SAL unregistered small packet delivery service is available. Yay! XD

Here is what they said about this matter:

We have just changed the promotion from only for Europe and USA to worldwide, mentioning that there are some countries where SAL Small Packet service is not applicable.
So we hope that most Asian Nendoroid fans can also participate in this promotion.

Well, there you have it! Simply head directly to J-Figure.com for further details about the campaign. Note that the promotion will end in about two weeks from today, so you will have to act fast. XD

Battle of the Toys is one of famous Toys Event in Jakarta, organized by SACCA. And now, again, Nendonesia is participating in this event. 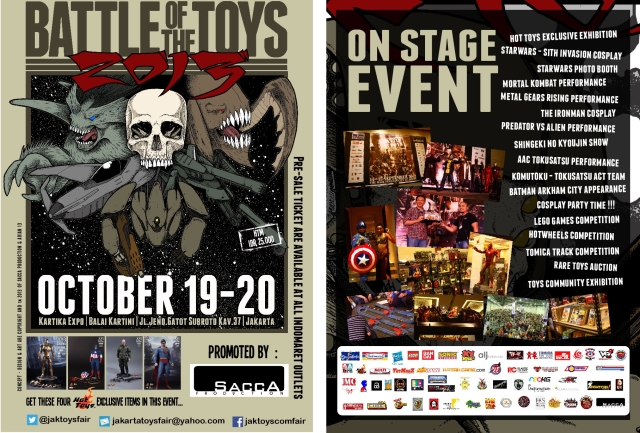 And, we’ll also having an On The Spot Photo Contest too!

We still working on the detail regarding this Contest, so stay tuned. Meanwhile, here is the Layout Plan.
Nendonesia is located at C12

Okaaaay…. may be this map is too small -_-
From Lego booth, just go up passing the alley. Crossing between A24 and A25, you will not miss it.

Of course, please prepare your wallet. If you’re not zipping it firmly, your money might fly like a pack of migrating birds 😀

Unless, you really want to “let it loose and have a blast” 🙂

So you have not pre-ordered Nendoroid Shinku: Rozen Maiden set? Well, this news might be able to change your opinion. XD

Yep, as you can see in the pic above, Shinku will have an updated expression, which is considered to be more doll-like. The old expression is the one to the left, and the new one is what you see in the right side of the pic.

… and that’s not all – Shinku will also get a brand new expression as well: a shouting faceplate to be used in her battle scene!

Yep, she will have a total of four expressions! Pretty nice, eh?

Oh, and following these changes, her pre-order period is also extended to October 16 – plenty of time to think and start planning your finance for the upcoming months. XD

“No matter how I look at it, it is your fault that I am not popular!”

Oh … it seems that Mokocchi has snapped! W-what should we do!? XD

In any case, Nendoroid Kuroki Tomoko from the anime Watamote is finally available for pre-order today!

“I know I won’t be popular… might as well become a Nendoroid.”
From the anime series that many people are sure to sympathize with, ‘Watashi ga Motenai no wa dou Kangaetemo Omaera ga Warui!’ comes a Nendoroid of the main character of the series, Tomoko Kuroki! She can be posed in various popular scenes from the series such as the famous panties tearing scene, or holding her Handy Massage Machine and ‘Nude Butlers’ game.

These optional parts together with her rather unique expressions allow for all sorts of fun poses for fans to enjoy! A piece of paper with ‘Reality’ written on it is also included as a special Nendoroid-only part for her to rip apart! Mokocchi’s really hoping you’ll give her some attention!

LOL! Her expressions are indeed hilarious, don’t you think so!?

Anyway, she will be priced at 3800 Yen and scheduled for February 2014 release.

As usual, you can see her up close and personal at Kahotan’s blog, so make sure to pay the blog a visit!

So … what do you think about her, Nendonesian? Is she on your pre-order list?

We have already saw Kahotan’s preview of Kantai Collection‘s Nendoroid Shimakaze last week, and now she has been ready to be pre-ordered!

“I’m first to become a Nendoroid? Of course I am! I’m always the fastest!”
From ‘Kantai Collection ~KanColle~’ comes a Nendoroid of Shimakaze, one of the cutest and fastest battleships you’ll ever see! Shimakaze includes various optional parts including three of the cute ‘Rensouhou-chan’ naval artillery cannons!

Other optional parts include an alternate body to pose her in her ‘half damage’ form, torpedo parts to fire on her enemy and even shooting effect parts for her cute little cannons. Recreate the world of KanColle in cute Nendoroid form!

Oh, and you can also watch the CM for Nendoroid Shimakaze, which also includes an announcement for the next KanColle Nendoroid …